After a long-fought series versus LeBron James and the Cleveland Cavilers, the Boston Celtics came up short in Game 7, losing in the Eastern Conference Finals for the second consecutive season. Do not let that first sentence dictate your view on what was otherwise a remarkable season.

Consider the circumstances:  just over 5 minutes into the first game of the season, your prized free agent acquisition goes up for an alley-oop, and falls – HARD – suffering a gruesome season-ending injury.  That alone would be too much to bear for many teams; but not Boston.  Suddenly, a gapping hole is left at the wing position, and a role that was meant to be filled by an All Star is suddenly left for a rookie and second-year pro.  You lose your next game, but rally for 16 straight wins, and continue to lead the Eastern Conference into the second half of the season.  You regress a bit, but still hold control of the two seed, and have one of the league’s best defenses.

Then more injuries emerge.  Marcus Smart, who already missed significant time, is ruled out for 4-6 weeks.  Daniel Theis, who has emerged as a mobile defensive threat, as well as a capable three-point shooter, has to undergo knee surgery… and your other prized offseason acquisition, Kyrie Irving, cannot handle the pain from a surgically repaired knee, and has to undergo two procedures, ending his season in the blink of an eye.  Young star Jaylen Brown suffers a scary fall in Minnesota, but thankfully it is just a concussion (and he returns soon enough).

Nevertheless, you rally to finish the season with 55 wins (two more than the season prior), secure the second seed in the Eastern Conference, and your young players develop.  But missing two of your starters from Game 1 of the season, your sixth man, and a key big in your rotation… depth is scare, and you’re simply undermanned compared to what you should be.

The roster you have cannot be enough for a long playoff run… or can it?

Over the next six weeks, you defy all logic, and go on a marvelous playoff run.  Backup point guard Terry Rozier III is suddenly a starting-level player, providing clutch buckets, and scarring the competition.  “He’s not worth the max” Al Horford notches up his play for the playoffs yet again, providing needed buckets, and playing stellar defense on the likes of Giannis and Joel Embiid.  Jaylen Brown becomes an offensive force in the first round, only to be followed by Jayson Tatum, who goes on a seven-game streak of scoring 20+ points.  You beat the Milwaukee Bucks in seven games in a series that critics considered ripe for an upset, and then you shock even more people (including yours truly) and storm into a series against the Philadelphia 76ers – who ended their season winning 16 straight games, and beat the Miami Heat in 5 games – and take the first three games against them, winning the series in 5 games.

Suddenly, you’re back in the Eastern Conference Finals, where no one expected you to be at the start of the postseason.  You face old foe LeBron James, but most critics have you losing in no more than 6 games.  But you blow James out in Game 1.  Expecting (and receiving) an offensive counterattack from the King in Game 2, you withstand a 40 point performance, and suddenly take a 2-0 series lead. Things do not go as well on the road, as LeBron and Co. dominate in Game 3, and win Game 4, but you bounce back at home (a common playoff theme) and take a 3-2 lead.

Unfortunately, that’s all Lucky had up his sleeve. LeBron dominates in Game 6, and grinds out a victory in Game 7, securing an eighth straight trip to the NBA Finals.

And just like that, a magical season is over.

But as sad as you may be for how it ended, remember some of the best parts of the season, the ones that made watching this team as fun as ever.

First off, Sean Grande (radio PBP) is a great follow on Twitter for all things Celtics.  This list illustrates the unlikely wins the Boston Celtics had all year. During their 16-game winning streak, Boston won FOUR games where the other team had more than a 94% chance of winning.  What soon became common, any deficit the team was facing felt slim, and this theme only continued for the remainder of the season (including into the postseason).  Let’s hope this intense desire to win only increases moving forward. 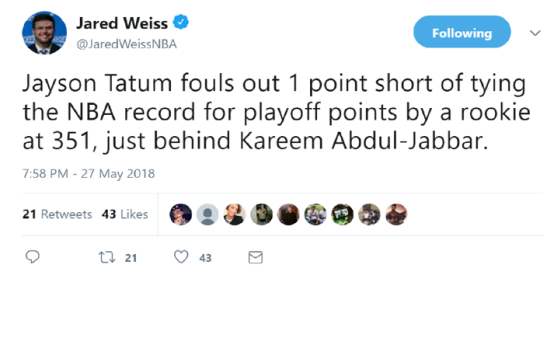 Rookie Jayson Tatum finished the postseason averaging 18.5 PPG, over 4 PPG better than his regular season output (13.9 PPG). Tatum seized the moment (illustrated by a remarkable dunk on LeBron James in the 4thquarter of Game 7), and proved the stage was not too big for him. At 20 years of age, expect this to be the first of many playoff runs for the young stud.

Terry Rozier III (dubbed “Scary Terry” by Coley Mick of Barstool Sports) assumed the starting point guard position in Kyrie Irving’s absence, and left fans with a lot to remember.  When Kyrie first missed a game in January, Rozier (in his first NBA start) put up a triple-double.  The added playing time (although he soon went back to the bench once Kyrie was “healthy”) led to a 25-game streak in which he scored in double digits(leading to a fun time on Twitter counting down the games until he caught Michael Jordan’s streak of 866 games).

Then the postseason started.  Yours truly witnessedTerry knock down a late three to take the lead in Game 1 versus Milwaukee… only to be outdone by Khris Middleton, who tied the game at the buzzer.  Nevertheless, Terry kept performing, and began trolling the opposing team’s starting PG Eric Bledsoe (accidentally calling him Drew, the name of the former Pats QB).  Once Eric said he did not know who the f— Terry was, Rozier embraced the newfound rivalry, and added a Drew Bledsoe jersey to his wardrobe.  As Drew Bledsoe suddenly remerged onto the Boston sports scene, Rozier came into the fold as well as a fan favorite.

Although some hopeful C’s fans openly began discussing trading Kyrie and letting Rozier take over as the starter, most (including Rozier himself) believe that may be too far-fetched.  As an owner of a Scary Terry shirt, I am a huge fan, and enjoyed all the moments he brought throughout this playoff run.

Out of all the things this team did this season, I’d be remised if I did not mention superfan Janos.  Janos (@isjanosnba) is one of the best follows a Celtics fan can have on Twitter.  Janos likes his soup, LOVES Rajon Rondo, wants his son to get a job, and overall, just enjoys watching Celtics basketball.

For a fun story on the rise of Janos, read this story by Tim Cato of SB Nation.  For all the people of Weird Celtics Twitter (and there are many), Janos is the true treasure of them all.

Although the season did not end in winning Banner 18, this rollercoaster ride was an absolute thriller.  Night in and night out, this team played their tails off, and competed until the very end.  In year 5 of the Brad Stevens era, this team won more games than the season prior (yet again), went further into the postseason than any prior Stevens team, and solidified itself in the eyes of many as a contender for years to come. Jayson Tatum (20) and Jaylen Brown (21) will be one year older and continue to develop into their second and third seasons.  All Stars Kyrie Irving and Gordon Hayward will return to the fold.  These four will also have All Star teammate Al Horford by their sides.

Expect some turnover in the bench, but at the moment, the following Celtics are under contract for next season: Terry Rozier III, Marcus Morris, Semi Ojeleye, Guerschon Yabusele, and Abdel Nader. Daniel Theis has a team option that Boston is sure to exercise, and Marcus Smart will most likely be given a qualifying offer, meaning he will enter restricted free agency this offseason (giving Boston the right to match any offer he may receive).  Jabari Bird has the second year of a two-way contract, but that could very well be restructured into an official NBA contract.  In terms of unrestricted free agents, Aron Baynes, Greg Monroe, and Shane Larkin will be in need of a new contract.

Also, for another well written preview of the upcoming offseason for the Boston Celtics, read Ryan Bernardoni’s piece on Celtics Hub.

Celtics fans, we have a lot to look forward to in the coming months and years.  This team is young, built to win now, and primed to win in the future.  Danny Ainge never rests easy, so expect some moves on his part.  I would not expect another big move (i.e. Kawhi Leonard), but never count out Danny Ainge making that move, especially if he things it will be for the better of the team.  At this time last year, we thought Markelle Fultz and Isaiah Thomas would be teammates; instead, Kyrie Irving and Jayson Tatum were suiting up in green on Opening Night.

I’ll have some more pieces on the state of the team moving forward (resign Marcus Smart? Trade Terry Rozier? etc.), but right now, lets all take a step back and look and what this team accomplished this past season.

As always, more fun is in store.