Look at that face (not you Terry Bradshaw).  So pretty.  Oh, and what’s that? The Vince Lombardi Trophy.  Cool, cool.

As we know, when Jimmy Garoppolo was traded to San Francisco last October, it left the Patriots with one QB: Tom Brady.  At age 40, Brady was suddenly the present, and the future.  Jacoby Brissett was traded in September, and with Jimmy gone, there was no safety net, no succession plan.  Indefinitely, at an age so far along in the history of the sport, Brady had a clear hold as the starter.

Why would the team who has always been meticulous about the roster leave the most valuable position on a football team left as an unknown.  The team that always trades the guy a year early, and the team that had a 25 year old QB on the roster, someone team czar Bill Belichick clearly liked.  Why treat Tom Brady any differently, when it was the treatmeant of the franchise QB in 2001 that LED to Brady coming on?

Maybe Brady was a special circumstance.

In a game versus the Golden State Warriors in 2013, Kobe suffered the worst injury for a basketball player: a torn Achilles tendon.  The injury has brutal effects on basketball players, limiting their athleticism, ability to jump, and it makes them shells of their former selves.

Unfortunately, that is the fate Kobe suffered.  Although Kobe played for 3 more seasons, he was not the same player.  He left his best days behind him after the injury.

Yet the Lakers did not leave Kobe behind.

In 2013-14, Kobe was in the final year of his contract, and the Lakers (even after the injury) decided they wanted to treat their legend right, giving him a 2-year/$48.5 million extension, securing Kobe through 2016.  Many speculated why the Lakers did this.  They knew Kobe would most likely never be the same player.  Even if he was, other players in their latter years had taken discounts in order to help their team (i.e. Tim Duncan).  Why tie such a large salary to Kobe?

Well, to me, the answer was that they were treating Kobe right for his first 17 seasons as a legend, making sure he knew how much he meant to the franchise he helped lead to 5 titles.  Even if Kobe would not be the same player to end his career, the Lakers were taking care of their own, giving up financial flexibly in the present in order to compensate Kobe for the past.

I know some of you are looking at me like “you do know who the coach of the Patriots is, right?”

Well we may not see the financial component of this analogy (yet), it is reasonable to think that the reasoning behind keeping Brady into his 40s was to honor the QB for his success in New England since 2000.  Reports have surfaced since Jimmy was traded that it was owner Robert Kraft who stepped in and said that Brady would not be moved, and that if he is still playing, he will be the starting QB for the New England Patriots; in other words, do not keep Jimmy Garoppolo around, because on my watch, he will not be the starting QB if it means letting go of Brady before Brady says he is done.

Since the 2014 season, he has a postseason record of 9-2 (with his two losses being by a total of 10 points; each loss being to the team that won the Super Bowl that season), in addition to throwing 28 touchdowns and 9 interceptions.  He has won 2 Super Bowl MVPs, and orchestrated the greatest comeback in Super Bowl history in Super Bowl LI.  Even in Super Bowl LII, in defeat, Brady passed for over 500 yards (a record).

All of this in his ages 37 through 40 seasons… all starting when Garoppolo got to town.

Why would you get rid of the best quarterback in the NFL who is playing at peak level, winning you Super Bowls, and is taking bargains every season (Tom Brady has never earned more than $20 million in total cash in a season)?  Between 2014 and 2017 (four seasons), Tom Brady earned $61,784,964 (roughly $15 million/year); that average salary in 2018 would be 23rd in the NFL for quarterbacks, right between Tyrod Taylor and Josh McCown.  Not only is Brady STILL producing, he’s doing so EFFICIENTLY!  HE IS GIVING YOU NO FINANCIAL REASON TO LET GO OF HIM! 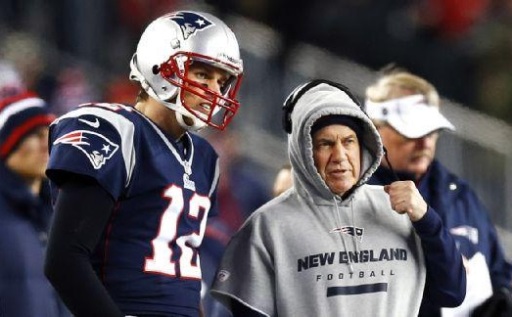 Now lets get down to it: If Brady is going to take discounts (to an extent), and is still producing at an MVP level, how do you make him happy?

You let him do whatever he wants, meaning not coming to voluntarily OTA’s if he does not want to (as long as he is ready for training camp), and simply being the starter indefinitely… Or maybe you just pay him more.

Brady knows how this works.  He is on record saying he knows he needs to produce or else he will get treated just like everyone else on this team ever has been.  How many other teams replace their franchise QB who is signed to a 10 YEAR contract, the best QB in team history, with a sixth round draft pick from Michigan?  Well I know one team, and so does Brady… if you earn the job, anyone is indispensable.

“Kraft also said Bledsoe has a chance to be remembered in Boston like Ted Williams, Bill Russell and Larry Bird, each having played his entire career in the city.”

Brady has played with a chip on his shoulder his whole life.  It’s how he became the starter, and it is what has kept him going for 17 seasons in that role.  Going into his 14th year as the starter, New England spent a second round pick on Jimmy Garoppolo, and what happened in the years that followed? Brady arguably had the best stretch of his WHOLE CAREER.

Tom Brady has been the ingredient that has taken a franchise that prior to 1993 only made the PLAYOFFS six times, and has made them one of the best and most valuable franchises in the world.  When healthy, Brady has only missed the postseason ONCE since becoming the starter in 2001 (2002; the team still won 9 games), leading New England to 12 AFC Championship Games, 8 Super Bowl appearances, and 5 NFL Championships in that time, and he has not regressed in any way, shape, or form (in my eyes at least).

Tom Brady is the first thing you think of when you think of the New England Patriots, and he is the main reason the team is what it is.  New England owes everything to Tom Brady, and the way to honor him is to let him go out on his terms, however long that may be.

If he is not losing the team games or money, why get rid of him?  Until that moment comes, there should be no reason to ridicule Brady’s presence on this team in favor of Jimmy Garoppolo…

And even if Brady begins to regress… Tom Brady has earned the right as the Greatest of All-Time to end his career however he wants, whenever he wants.  He has been a loyal soldier for over 18 years, has taken pay cuts again and again, and has allowed this team to be the best of the best for two decades.  If you have to change the calculus for 2-3 years and pay Brady a bit more, you do it.  If he wants to play until he is 45, as long as he is producing, he should have his way.  The “cliff” Brady would have to fall off of in order to make him a liability to the day-to-day operations of this team would be astronomical.

Even as just a top 10 QB in this league, he’d be worth it (financially and logically).

Tom Brady has earned the right to cement his legacy and end his career having played for only one franchise (like Kobe), and every effort should be done to allow him to do so… and by trading Jimmy Garoppolo, it is clear those efforts are being made.

But who is calling those shots?