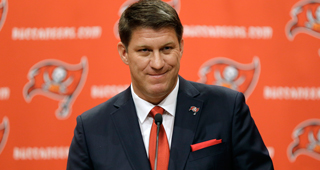 Jason Licht isn’t a household name, and he shouldn’t be. He’s the Tampa Bay Bucs GM and he just got another extension. Now, I know finesse when I see it and this man just fleeced the Bucs.

The Bucs haven’t made the playoffs since their 2007 playoff loss to the eventual champion New York Giants… God that almost made me throw up typing that. Any who, Licht hasn’t made built a playoff team since joining the Bucs in 2014. Now he’s signed through 2019 relying on inexperienced players to reach somewhere they never have before, the playoffs.

Finishing dead last in their division last year, Licht hasn’t built a squad around Mike Evans and Jameis Winston. Yes Winston had an awful year this past year but I think there’s still hope in his career, if he grows up.

Licht deserves to be fired instead of being praised by his boss for the shitty job he’s done with a team that has good pieces to build around. Lets hope this guy knows what he’s doing because on the outside looking in, it feels like some inexperienced goofball is running a franchise that has one a Super Bowl way back when, and would love to see another one brought back soon.