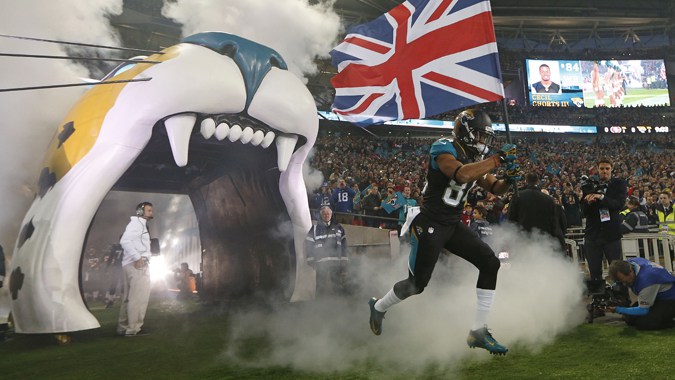 Jacksonville Jaguars owner Shad Khan (sweats profusely trying not to insert lame Chaka Khan joke) is in the midst of buying Wembley Stadium in London from the Football Association. The billionaire is planning to buy the legendary stadium for £900 million, which is the equivalent of a little over a $1 Billion in US dollars.

The owner of Fulham F.C. and The Jacksonville Jaguars has vehemently denied that he will move both teams from their stadiums. But as reported by The telegraph and The Independent, former assistant director of football from Fulham Craig Kline has claimed that Khan’s main goal is to move the Jaguars from Jacksonville to London by 2022.

Apparently, the NFL claims that it can’t support 2 NFL teams in the North Florida Market, which hold The Tampa Bay Bucs and the Jaguars. To be honest, I can’t blame them too much since both teams have been trash for a while. With Tampa, they have a decent fan base who witnessed a championship 15 years ago, but those days are long gone. But with the Jaguars, their owner is rich enough to pull something like this off. He is about to own one of the best stadiums in the world (Wembley), and the Brits love American football.

The attendance at Wembley Stadium for NFL games shock me. Bad football games = bad attendance; right? Well they must put something in that tea over there because a 2016 game between The Redskins and The Bengals drew out 85,000 spectators, a little under 18,000 more than what TIAA Bank Field can hold (Jaguars Stadium).

The Jaguars moving to London from a business standpoint isn’t too bad. New fans who constantly support teams, no matter how bad they are, is awesome. The more fans, the better, even if they don’t understand it too much. Even last years game, with the Jaguars, had almost 85,000 in attendance. But in order for the move to happen, Khan would need 24 votes out of a possible 32 from NFL owners. Moving could re energize their overseas fanbase and bring in profits for the NFL and Khan.

I’m all for the move as long as the fans over there keep supporting whatever teams go over there. The stadium is beautiful and the people seem friendly. But how will teams travel? How are the Jaguars going to play west coast teams, and how will they deal with the horrible flight times? I’ll leave that for another time, maybe after a few drinks I’ll come up with a godly solution.