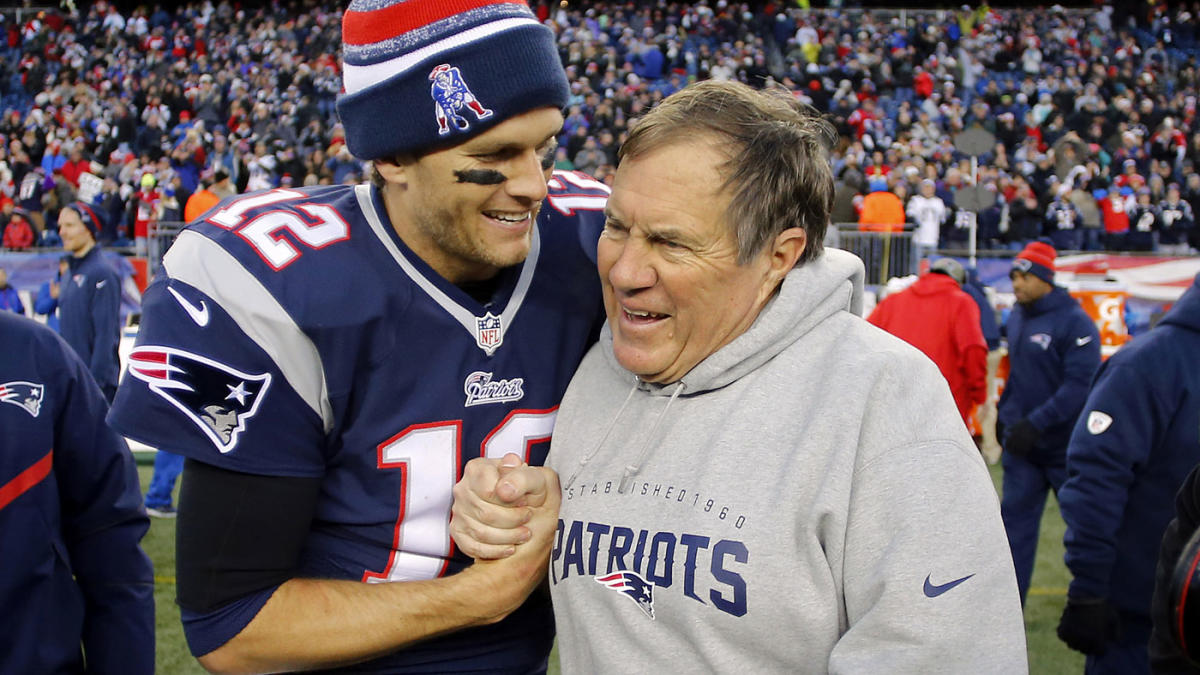 I started off sharing my top 10 Patriots games since 2014 yesterday here.

Today, we’ll go throw the top 5 games since 2014 (spoiler alert, each game below is from the postseason).

Another Patriots comeback victory, but this time, for a trip to the Super Bowl. The Jacksonville Jaguars gave New England all they could handle, and with a 20-10 lead in the 4th quarter, they were on the verge of reaching the Super Bowl for the first time in franchise history. After a costly fumble by Dion Lewis, the Jags got the ball back, but did nothing with it. New England regained possession, and even though they got to 3rd & 18, they were able to move the chains. After a flea flicker, Brady found Danny Amendola two more times, including for a touchdown to bring the game to 20-17 (see first video above). Jacksonville was unable to score on their next possession, but neither was New England. The Jags got the ball again, but went three and out. A great punt return by Amendola gave the Pats the ball inside Jacksonville territory. New England walked down the field, and then Brady found Amendola in the endzone (see second video above), and an amazing catch there gave New England a 24-20 lead. Jacksonville was able to get pass the 50 yard line, but on 4th & 14, Stephon Gilmore made a remarkable play to prevent Jacksonville from moving the chains, and he secured the a win for New England, and a second straight trip to the Super Bowl.

You like comebacks? Well, this is the game for you. Baltimore was able to take an early 14-0 lead, and quickly people remembered the success the Ravens had at Gillette Stadium, as they had won 2 of their last 3 postseason games in the building. However, this year was different. New England scored a TD in the first quarter to make it 14-7, then another in the second quarter to tie the game. Baltimore proceeded to get in the endzone as well, and then after holding New England to a three and out to begin the third quarter, they scored again, making it 28-14, their second two-TD lead of the game. It would not last long, as the Patriots scored a TD on their next possession. New England forced the Ravens to punt on their next possession, and quickly went to work. After two short passes that put the Patriots at the 49 yard line, Tom Brady let Julian Edelman show the world his arm strength (video above), throwing him a pass that looked like a screen, only for Edelman to pass the ball deep to fellow receiver Danny Amendola, who was able to score a TD, thus tying the game at 28. The Ravens took another lead with a Justin Tucker field goal, but it was not enough. The Patriots proceeded to go on a 10-play drive, which ended with a perfect pass from Tom Brady to find Brandon LaFell for a 23-yard TD, giving the Patriots a 35-31 lead. The Ravens moved down the field, but Joe Flacco threw an INT, and that all but wrapped up the game. Another trip to the AFC Championship Game for the Patriots.

I still cannot believe the Patriots won this game. I never once felt comfortable, even as New England took a 14-0 lead going into halftime. That two score cushion did not last long, as KC was able to score during the first possession of the third quarter, making it a 14-7 game. After each team failed to score on their next possession, the Patriots got the ball again, kicking a FG to make it 17-7 with 4 minutes left in the third… then the fireworks began.

KC scored a touchdown early in the 4th to make it 17-14. The Patriots went for it on 4th & 1 at the KC 25 during their next drive, but failed to convert, giving the Chiefs the ball back. KC then went three and out, but Tom Brady threw his second INT of the game during the next possession, and KC suddenly had great field position. They scored a TD two plays later, taking a 21-17 lead (their first of the game). The Patriots responded on their next drive, which included getting a first down on 3rd & 8, and scoring a touchdown on 4th & 1 at the KC 10 line, giving them a 24-21 lead. The Chiefs went to work again, and after a long play by WR Sammy Watkins, they were able to score another TD, regaining the lead at 28-24. Brady got the ball back with 2 minutes to go, trailing in yet another playoff game… but we know how this story goes. Two quick completions put New England at the KC 34. The next two plays were incompletions, making it 3rd & 10. Brady proceeded to throw an INT… but the Chiefs were offsides, giving the Patriots 5 yards, and another life. Brady then connected with Rob Gronkowski to put the Pats at the KC 4, where Rex Burkhead proceeded to score a TD, giving the Patriots a 31-28 lead. The Chiefs were able to get enough yards to kick a FG and tie the game, sending it to OT. There, the Patriots got the ball first, and on a methodical 13-play drive, they scored a TD, winning the game 37-31, earning another trip to the Super Bowl.

Some will get mad I put this game here, but I’ll explain why after. Regardless, this is one of the greatest games in NFL history. The Patriots could do nothing right to start this game, and going into halftime, were trailing 21-3. The Falcons scored another TD in the third, making it 28-3… then the greatest comeback of all-time began.

The Patriots went on a 13-play, 75-yard drive to score their first TD of the game, but they failed to make the XP, so the score was now 28-9. The Falcons went three and out on their next possession, and the Pats got the ball back early in the 4th. Their 5 minute drive was only yielded a FG, making it 28-12 with less than 10 minutes to go. The Patriots defense stepped up big time on the next Falcons possession, as Dont’a Hightower forced a fumble on QB Matt Ryan, giving New England the ball back at the ATL 25. After being sacked, Tom Brady completed 4 passes on the next 4 plays, which included a TD to make the game 28-18. The Patriots went for 2, and a direct snap to James White succeeded, as the Pats now only trailed by 8. However, the Falcons quickly got a first down on their next possession, and then a long, spot on pass to Julio Jones gave them the ball at the NE 22. Game over, right? Wrong.

Atlanta was stuffed on their first down running play, and then Matt Ryan was sacked by Trey Flowers, putting the ball at the NE 35. On 3rd & 23, Ryan completed a pass to Mohamed Sanu, but it was called back due to offensive holding, moving the Falcons back to the NE 45. The Falcons were now out of FG range, and an incomplete pass forced them to punt, giving the Patriots the ball at their own 9-yard line with 3:30 to go.

The Falcons quickly held the Pats to 3rd & 10, but Brady found Chris Hogan for 16 yards, giving the Patriots a first down. The Patriots got another first down, and then Brady somehow connected with Julian Edelman on a deflected pass that was inches away from hitting the ground; after a review, it was ruled a catch. Now at the ATL 41, Brady found Danny Amendola for 20 yards. Two passes to James White, and the Pats were at the 1, where White ran it in for a score. The Patriots had to go for two, and there, Brady connected with Danny Amendola on a short pass, and he was able to get into the endzone to tie the game. The game then went to OT, and the Patriots received the ball. Brady completed 5 passes on the first 5 plays of OT, and then a run by James White put the Pats at the ATL 15. Brady then threw to Martellus Bennett, and due to a DPI in the endzone, the Pats moved to the ATL 1. After an incomplete pass, James White ran the ball on an HB toss, scoring a TD, and giving the Patriots a 34-31 win, and their 5th Super Bowl win since 2001.

This is my favorite game ever. I’m biased, but it’s the first time I remember watching the Patriots win a Super Bowl. After heart-breaking defeats in big games between 2005 and 2013, I was getting anxious by this point, having not been old enough to remember the Patriots beat the Eagles in 2005.

This game started great, as each team scored two TDs in the first half, and the game was tied at 14 going into the second half. The Seahawks proceeded to kick a FG to open the third, taking a 17-14 lead (their first of the game). Tom Brady threw an INT on the Patriots next possession, giving Seattle the ball back. They scored a TD, making it 24-14. With their strong defense, their lead felt like more than 10 points.

The defenses of each team had some success, as the Seahawks and Patriots each had two unsuccessful possessions resulting in punts. At this time, New England got the ball back with 12 minutes to go in the 4th. Seattle got the Patriots to third down twice, but each time Brady connected with Julian Edelman to get a first down. The Patriots got to the SEA 4 after their second third down conversion, where Tom Brady ultimately connected with Danny Amendola for a TD, making it 24-21 with 8 minutes to go.

The Seahwaks went three and out on their next possession, forced to give the ball back to New England. The Patriots started at their own 36 with less than 7 minutes to go, and went to work. Brady was a perfect 8 for 8 on this drive, passing for 65 yards. The Patriots got inside the Seahawks 10-yard line yet again, and on a 3-yard pass to Julian Edelman, New England took a 28-24 lead with just over 2 minutes left.

After getting the ball back, Russell Wilson connected on a pass to Marshawn Lynch that went for 31 yards, and Seattle was able to get to the NE 49 at the 2 minute warning. They were then able to get a first on 3rd & 10, and with a little over a minute to go, Wilson somehow connected with Jermaine Kearse on a crazy pass, putting the Seahawks at the NE 5 with a minute to go. After a timeout, Marshawn Lynch ran it for 4 yards, just missing out on a TD. Neither team proceeded to call a timeout, and as the clock ticked, Seattle set up for a pass. Seattle went for that pass, and then on one of the greatest plays in NFL history, Malcolm Butler was able to jam himself into the window and intercept the pass at the goal line. The Patriots got the ball back, and after a Seattle penalty, they were able to kneel down and end the game, winning their first Super Bowl in 10 years, and 4th since 2001.

Photo above from CBS Sports