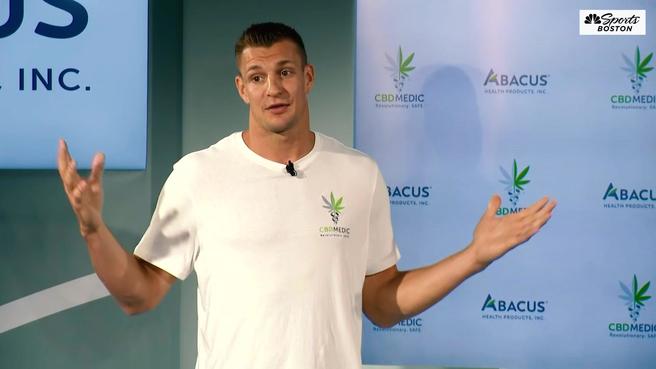 Today we got our major announcement from Rob Gronkowski.

Sorry to disappoint, Stephen A, but Gronk will be staying ON the weed(uh).

Rob Gronkowski announced that he will be partnering with a medical cannabis company to promote the use of CBD.

Gronk isn’t the first former athlete to come out in partnership with a CBD-related product.

Paul Pierce has come out in support of CBD, and came out with his own line of products this past summer.

Former NFL QB Jake Plummer has shared how CBD helped him recover from the wear and tear of football, and also was part of a letter to the NFL to promote the use of CBD for athletes, and asking the NFL to take it off of it’s banned substance list.

Gronk made a similar plea today.

The toll that athletes take, especially in the NFL, is gruesome.

The pain killers that these trainers have players take are brutal, and many cite little to no relief because of them.

As the years have gone by, we have learned more about CBD and it’s pain-relief attributes, and many have found refuge with their related products that they simply could not elsewhere.

However, unless federal restrictions change, we likely will not see a change in the prohibition to weed and cannabis related items in sports.

But back to Gronk.

Today he outlined an injury he suffered during the Super Bowl (video below), one that none of us had heard of until now.

Best I can tell, this is the play Rob Gronkowski was referring to during his press conference where he said he decided Super Bowl LIII was going to be his last game #Patriots pic.twitter.com/Cm0KeY2tsM

We know the back injuries Gronk has suffered, in addition to the various other ailments, but this sounded very serious.

He says he could barely sleep for the days and weeks following the game, and had to cry himself to sleep after the Super Bowl.

Over the course of the next four weeks, he says he had a total of 1000 milliliters (one liter) of blood removed from his body, and that he was internally bleeding.

“I want to be clear to my fans. I needed to recover. I was not in a good place. Football was bringing me down, and I didn’t like it. I was losing that joy in life”

Gronk made sure to leave the door open and said if he has passion for the game, he would come back.

Gronk, please, DO NOT COME BACK!

People were quick to outline that if Gronk were to come back, he’d quickly be in-line for a suspension due to using CBD.

He also cannot be in partnership with a CBD company while in the NFL, so there’s another thing he’d have to get up.

Put that aside, listen to his words.

He could barely sleep. He was losing joy for life.

I don’t care who you are, if you’re in that dark of a place, you need to stop whatever is causing you that pain, and seek help.

I understand plenty do not have the opportunity to be able to move on from what they’re doing like Gronk, but since he does, he shouldn’t look back.

Yes, he was the most dominant tight end in NFL history.

Yes, if he came back in a year, he’d still be better than more than half of those at his position.

He worked his whole life to get this far, and probably still loves the game, and could wake up one day and feel a void in his life, and have that passion to return (see: Jason Witten)… but I just don’t want to see him in pain.

Gronk has some of the most detailed injury woes we’ve seen of a player in the NFL.

He’s young, charismatic, and has a long future ahead of him in many fields.

You gave it your all on the field for 9 seasons, and were one of the best to ever do it.

Enjoy the rest of your life, leave this chapter behind.