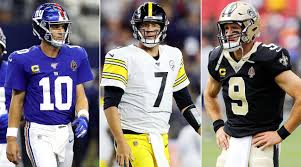 This past week has been brutal for some of the best QBs of this generation.

Drew Brees tore a ligament in his thumb, and is expected to miss 6 games.

Ben Roethlisberger suffered an injury to his elbow, and will miss the remainder of the season.

Eli Manning was (finally) deemed to be bad enough to bench, and in comes rookie Daniel Jones to replace him.

Suddenly, the active QBs with the second, third, and fourth most experience at the position will not be playing this Sunday, and in their place, two first-time starters, and Teddy Bridgewater, who has started just 30 games during his career.

Couple this with the retirement of Andrew Luck, who was replaced by Jacoby Brissett, and it’s even worse.

The NFL’s chief draw is the quarterback position, which is apparent when primetime games are scheduled.

Now, the bigger draws of the game are on the sidelines, and some may never see the field again.

How does this effect the NFL as a product?

Well, in the short term, it is not good.

Sunday Night Football will take a big short-term hit due to the QBs listed above.

Here’s a look at the next 4 SNF games:

The Browns got some redemption on Monday when they beat the Jets, but the Jets were without Sam Darnold, and then their backup Trevor Siemian demolished his ankle during the game, so maybe it was a fluke.

This Sunday will be their first SNF game since 2008, but are they ready?

The next three weeks each see a game which, in the offeason when these games were bid on by perspective networks, looked like great matchups, but are now compromised due to QBs who won’t be playing.

Dallas and New Orleans could have been a preview of a playoff game this season, but with Drew Brees out, the Saints will now have to fight to stay alive in the NFC before he comes back.

The Colts and Chiefs faced off in a great playoff game last season, and Andrew Luck and Patrick Mahomes looked like the two best QBs in the game by the end of last season; now, Luck is gone.

The Steelers and Chargers faced off in what turned out to be a dramatic SNF game last season, with Los Angles sneaking away with a win. Now, without Big Ben, the game will not be the same.

You might be asking: can’t NBC change any of these games for a better matchup?

Games can’t be flexed until Week 11, so we’re stuck with these matchups.

I’m sure some will be competitive and fun to watch, but the initial pull is not the same as it was a month ago.

All is not lost, as the games for SNF look really compelling after this (i.e. Patriots at Ravens in Week 9).

If we look to Monday night, things are looking MUCH bleaker (as pointed out by Barstool Sports).

Here’s a look at the next 6 MNF games:

Cincy and Pittsburgh might have been a really good game (it’ll still be competitive because it’s a divisional game), but it’s not the same now.

If more than 5 people tune in to watch Miami at Pittsburgh, I’ll be stunned.

Chicago and Washington sounds like a snoozer, just an ugly game.

Cleveland and San Fran is the game that features the past two champions of the offseason, but hopefully they’ll have more good play (and not luck) leading up to this game and make it interesting.

Finally, New England and the Jets… that’s a demolition waiting to happen (at least Darnold should be back by then).

There’s a late season MNF that pits Indy and New Orleans, which looked amazing on paper last month, but is much less appealing now (although Brees should be back by then).

Finally, Thursday night, which usually sucks anyway, takes a hit as Big Ben will not be able to face the Browns in Cleveland in November, and we will not get to see Eli Manning face the Patriots during Week 6 (yes it would’ve sucked, but I mean I heard he beat Brady once… or twice… no you shut up).

The NFL is changing, and we may have just witnessed an era come to a close on Sunday.

QBs such as Patrick Mahomes, Deshaun Watson, Carson Wentz, Dak Prescott and Lamar Jackson will headline games in the years to come.

Prospects such as Tua Tagovailoa and Trevor Lawrence could be huge draws in the future.

Of course there are names we haven’t heard of that will enter the game.

This still doesn’t deny that some of the biggest draws the game has had the past 15 years may soon no longer be on the field.

Maybe we have finally entered the future…

Well, Tom Brady is still around, so maybe not.

Above photo via Sports Illustrated