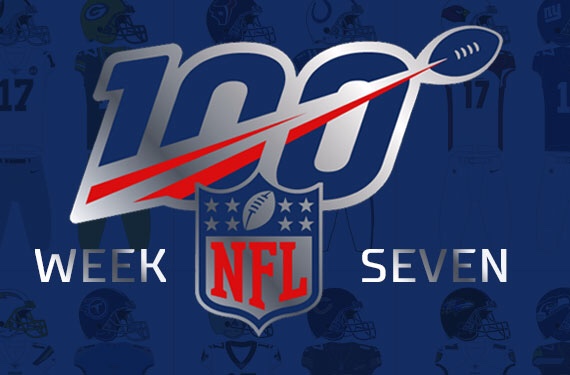 Another week is in the books! We’re almost at the halfway mark on the beautiful NFL season and the competition is looking great!

From the Colts proving to be a contender, to the Patriots trading for Mohamed Sanu after destroying Sam Darnold, and coaches guaranteeing wins before getting curb stomped, this past weekend was “Alright. Alright. Alright.”

Sam Darnold is mic’d up and he came to the sidelines and said, “I’m seeing ghosts.”

I’m not even going to get into the stats from last night’s game between the Jets and the Patriots. Just know New England’s defense shook Darnold so much he thought he was seeing ghosts. Not exactly the weakness he envisioned finding and exploiting.

“We’re going down to Dallas, our guys are gonna be ready to play. And we’re gonna win that football game and when we do we’re in first place in the NFC East.”

How can you say that and then not just lose, but get your asses kicked from Dallas to Philly!? Get your team prepared instead of talking.

Next week Philly faces a Bills defense who’s way better than the Cowboys’. Ass-kicking central? Maybe. But this does make me wonder if the Eagles kept the wrong QB…. FOLES!

The Seahawks are in contention in a very competitive NFC. They’re up there with New Orleans and San Francisco as far as contenders go… But on Sunday, the Ravens pulled a win in Seattle against MVP candidate Russell Wilson.

As impressive as that is, I need to see more out of them.

They’ve lost to the Browns and Chiefs this season and that’s what has me weary of picking them to go farther than the divisional round. This was their first win against any team that is decent (sorry Miami, Arizona, Pittsburgh and Cincinnati).

They have a good defense as well as a dual threat QB who is an elite playmaker. Lamar Jackson has rushed for 576 yards, which is tied for sixth in the league, and passed for 11 TDs and 1650 yards.

Due to week 8 being a bye week, their next game is against the Patriots on November 3. That will be a true test to show whether or not they’re legit. After the Patriots, they have the Texans, Rams, 49ers, and Bills lurking as tests.

Now I’m not saying they won’t make the playoffs, but that this amazing Bears defense can’t do it all. We’ve seen defenses carry teams to the Super Bowl, but those teams had decent game managers.

They’ve only scored above 25 points once in games he’s started (5 total), and that was against the Redskins! Yes they won against the Vikings but that’s a fraudulent team and anybody with eyes can see that.

They have no other options at QB this season, but it makes you think if they make a run at Teddy Bridgewater next season or maybe Nick Foles (sorry, but Minshew Mania stole his job).