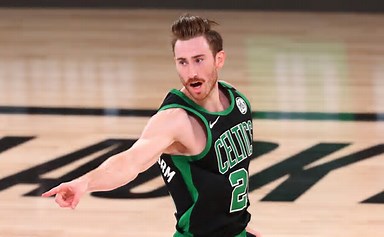 The injury woes continue for Gordon Hayward in Boston.

Hayward sprained his ankle in the 4th quarter of the Celtics win against the 76ers on Monday, which was revealed to be a Grade 3 sprain. This type of sprain means ligament tears in some capacity. The initial recovery time is reported to be 4 weeks, but that could be optimistic.

Boston was going to have to adjust for a few games without Hayward at some point due to his wife being pregnant and him planning to leave the bubble, but now we will not see Hayward until the Eastern Conference Finals – at the earliest. This assumes Boston goes that far, which will now be more challenging.

Hayward missed 19 games this season, specifically a 13-game stretch early in the season after he broke his hand.

A look at that stretch may indicate how Boston will fare moving forward.

When Hayward was out, Marcus Smart came into the starting lineup.

Smart started 12 of the 13 games Hayward missed before dealing with a freakish eye infection.

For the sake of replacing Hayward, if you can roll out one of the best defenders in the NBA into the starting lineup, you’re in a good spot.

Marcus doesn’t need the ball in his hands to be successful, but he is an efficient playmaker.

Compared to Hayward, Smart is not as good of a shooter. Serviceable, but his primary job won’t be to replace the shots Hayward’s absence provides.

Hayward was the 4th scoring option on this team. You can argue if his added playmaking ability vaulted him over Jaylen Brown in terms of value, but with Hayward gone, Boston will still score.

What stands out immediately is how good Jaylen Brown looked. There were calls for Jaylen to be an All-Star this season, and they began with how good he looked during this stretch. Shooting nearly 50% from the field and over 40% from three is very, very good. The one drawback (as has been the case during most of his career) was that he shot under 70% from the free throw line. Still, he played really great.

Jayson Tatum on the other hand… Tatum was scoring more than last season, but the efficiency was simply not there yet. Luckily for Boston, once Hayward came back, from that game through the rest of the regular season (44 games), Tatum averaged 24.5 PPG on roughly the same amount of shots per game. Difference was his FG% went to .468, and his 3P% jumped to .423 on 7.2 3PA per game.

Kemba Walker’s numbers were consistent compared to the rest of his first season in Boston, meaning a highly efficient three point shooter and complimentary scoring option who can take over if need be.

The main responsibility of these three will be to assume the scoring that Hayward will leave on the table. I’m sure they’ll be just fine with having the opportunity to get some added shots.

With Hayward off the court, 30 plus minutes come up for grabs.

In Game 1 against Philly, Hayward registered 35 minutes before leaving with 3 minutes to go. If he wasn’t injured, he likely sees 38 minutes.

Those guys aren’t going to assume much more playing time, and certainly not the complete playing time of Hayward.

This means someone will join the rotation, while other role players will see more playing time.

The first person I expect to see more minutes is Brad Wanamaker. He played about 11 minutes in Game 1, but earlier this season when Hayward was out he played over 21 MPG.

Brad played 20 MPG from Hayward’s return through the rest of the season, but in his absence, Wanamaker averaged 9.6 PPG and 3.5 APG, a big increase for just 80 more seconds per game of action.

Wanamaker will assume some more playmaking responsibilities with Hayward gone. Hayward’s skillset became beneficial when Kemba was off the court, as he and Marcus Smart would become the facilitators of the offense with bench players on the court. It seems clear Wanamaker assumed more of those responsibilities without Hayward once this season, and I expect it again.

But Brad was already in the playoff rotation.

In terms of someone entering the rotation, it’ll come down to Semi Ojeleye and Romeo Langford.

Ojeleye is the veteran of the two, and has playoff experience, but Langford seemed to be the more impressive of the two during the restart.

However, Langford tore ligaments in his right hand during the season finale.

Langford says he feels better, but as someone who’s already had injury-related shooting woes, this is a setback. In his defense, scoring won’t be his primary responsibility on the court, and he has done a solid job in other aspects of his game during the restart, but you have to worry how limited he’ll be, which could become amplified being a rookie playing in his first postseason.

Ojeleye was one of the players that saw more time during Hayward’s absence, registering 17.2 MPG. He shot 40% from three, which is very promising. Boston already had a tough time in minutes without Tatum and Jaylen off the court, as the bench has a tough time scoring. Ojeyele is a spot up three point shooter, nothing more, but if he can hit those shots, it’d be huge. Ojeyele is also a big body who was covered Giannis in the past. Maybe he could be an additional body to throw and Joel Embiid during this series, and someone like Pascal Siakam in the second round. I won’t call him a defensive guru, but if he can add physicality, take on some fouls and be a pest, it will be very beneficial to this team.

This could also create an opening for Grant Williams. The rookie seemed to be out of the rotation during the restart, but he was useful early in the season. Williams reminds me of a taller version of Marcus Smart, someone who does the little things really well. Williams’ offense is not reliable for this setting, which ultimately could lead to him sitting, but he could provide an energy boost for the team, and maybe he can replicate some of what Smart brings if he’s going to have more responsibility on offense.

Replacing Hayward’s minutes will not be easy, and it could further highlight the inexperience and talent of Boston’s bench compared to it’s starting lineup, but this is also a team more than familiar with adjusting on the fly and not being at full strength.

They didn’t call them the Hospital Celtics in 2018 for nothing!

Gordon Hayward is a solid, solid player, and finally seemed to have been playing like his Utah self this season. He was written off last season, blamed for a lot of the Celtics issues, but this season proved he can raise the ceiling of this group.

However, I would not say he’s the foundation of this team.

The first 45 minutes of Game 1 showed this team belongs to Jayson Tatum and Jaylen Brown.

In the span of 13 minutes and 55 seconds between the second and third quarter, Jayson Tatum scored 22 points while going 9 for 11 from the field, 2 for 3 from three, and 2 for 3 from the free throw line. He finished the game with 32 points.

If Jaylen Brown and Jayson Tatum are going to have individual stretches like this in a game where they simply take over, Boston is going to be hard to stop with or without Gordon Hayward.

Hayward makes life easier for those guys, but his absence could give them even more scoring opportunities.

Then you have Kemba Walker.

Kemba is finally off his minutes restriction, and with that he can start playing like himself and take on more responsibility. He was only playing 25 MPG in 6 games during the restart, but was shooting .491 from the field and .429 from three. He did this on 9.8 shots per game, so imagine it on 16-17 shots per game.

Boston was already a strong defensive team, and there is sure to be an added emphasis on that moving forward. Marcus Smart’s addition to the starting lineup should make things even harder for every 76er not named Joel Embiid. Semi Ojeleye could have a chance to prove he’s a valuable role player during Hayward’s absence.

Boston will stagger the minutes of their starters, but the bench will again be asked to win the minutes they are on the court in some capacity. This was the biggest challenge facing Boston already, but if the final handful of games in the bubble have proved anything, they have the potential to hold their own.

Do that again, have Tatum and Brown continue to excel while Kemba gets more touches, and Boston will continue to compete.